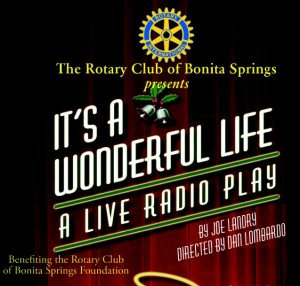 Bonita Springs, Fla. – (Jan. 9, 2014) – Director Dan Lombardo has named the cast for the local production of “It’s A Wonderful Life: A Live Radio Play,” one of the 10 most produced plays last year in America. Inspired by the classic American film, the play is performed as a 1940s live radio broadcast in front of a studio audience. Twelve actors perform the dozens of characters in the radio play, as well as produce the sound effects.

Actors selected for the local production include:

Tickets to It’s a Wonderful Life performances now are available: VIP tickets for reserved, preferred seats and including a pre-performance Director’s Reception are $60, and general admission tickets for unreserved seats are $30. Tickets can be purchased online through the Rotary Club’s website at www.bonitaspringsrotary.org  or directly at https://events.admitoneproducts.com?event_id=390213

For more information, visit the Rotary Club’s website at http://bonitaspringsrotary.org/

The Rotary Club of Bonita Springs is made up of a diverse group of business professionals and civic leaders who take an active role in the communities they serve.  The club is part of Rotary International, a service organization with more than 1.2 million members in 200 countries who bring needed humanitarian improvements to some of the most impoverished parts of the world, as well as in local Southwest Florida communities.